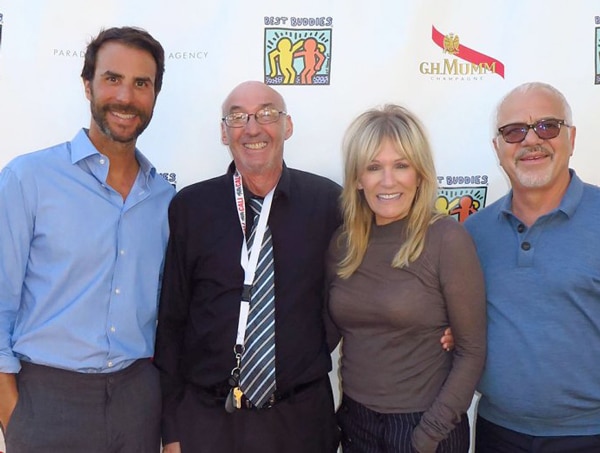 For the past nine years, three days a week, Bradley Gunther leaves his home in Marina del Rey and takes the bus to Beverly Hills, where he is the most veteran employee in the mailroom at Paradigm.

“I deliver mail and supplies for both buildings, and it’s a very important job to me,” says Gunther, 62. “I enjoy my life.”

Gunther is a participant in the jobs program at Best Buddies, a nonprofit founded by Anthony Kennedy Shriver that works for the social integration and economic independence of people with intellectual and developmental disabilities. During a reception in Paradigm’s courtyard Friday evening, the organization honored the agency with its annual Vanguard Award, presented to a partner company that has hired an individual with IDD.

“We have a person-centered model that pitches each individual’s ability and skill set,” says Best Buddies California state director Jessica Brooks of the program, which finds long-term job placements for its participants. Best Buddies participants, whom the organization touts as reliable and highly motivated, are therefore well-suited for jobs that otherwise typically experience high turnover.

Paradigm joined the program nine years ago when Ben Silverman, a member of Best Buddies’ board of directors, called agency partner Debbee Klein and told her to get involved. “It was not really a request; it was a demand,” Klein tells The Hollywood Reporter. “I did some very quick research, and within 48 hours, I said, ‘We’re in.’ ”

Like every other Best Buddies participant, Gunther, who describes himself as a “slow learner,” came with a job coach who continues to work closely with him and his supervisors on a regular basis. In all other aspects, he is a regular employee on the payroll. “It takes me a long time to learn something, but as long as the boss has patience, I can learn the job,” he says. “As long as I put my mind to something, I can do anything just like anybody else.”

An estimated 84 percent of adults with IDD are unemployed. Since 1992, Best Buddies California has placed 94 individuals in jobs across the state. At Friday’s reception, Best Buddies honored other participants who had reached employment milestones, such as Colleen Moriarty, who is marking her 20th year at UTA, which was the first company to join the jobs program and was the inaugural Vanguard recipient. Other companies that have hired through the jobs program include Fox, WME, Netflix, the NFL Network and law firm Manatt Phelps.

The reception also featured remarks from program participant Tzvi Burston, who works as a production assistant on Fuller House. Burston’s long list of tasks — making sure trailers are properly stocked, keeping track of castmembers on set, answering phones and emails — is identical to any other PA’s, the only difference being that his hours are scheduled around certain filming times, as his wheelchair (Burston has cerebral palsy) makes it hard to navigate around cameras.

“You have to prove yourself more, and I enjoy the challenge of it,” says Burston, who credits series creator Jeff Franklin for giving him the life-changing opportunity. “I like the fact that at Warner Bros. I’m indirectly breaking barriers.”

“The culture of a workplace changes when they hire a participant of ours,” says Best Buddies director of operations and programs Ryan Erickson-Kulas, and Klein agrees that Gunther has indeed had that effect on Paradigm.

“This is a tough business. It can get very intense and competitive,” she says. “Most of us are so wrapped up in our deals and our clients’ lives, but Bradley reminds us every single day when he walks the hall with a smile on his face of what’s important in life. I’ve never not seen him like that, ever.”

Multiple Paradigm employees cited Gunther’s reputation for ceaseless cheer and for being the first one on the dance floor at agency parties. Gunther, who fielded a steady stream of congratulations throughout the evening, said that his colleagues have become his friends, ordering coconut cake — his favorite — on his birthday and taking him on trips to the beach and movies.

“Every person who has come through this mailroom in the last eight years has formed a unique and interesting relationship with Bradley,” says Ben Scott, Paradigm vp human resources, who adds that the agency is next looking to expand its participation in Best Buddies to its New York office. “Bradley’s really been seamlessly integrated into the organization, and he’s done phenomenal work over the years.”

“I can do a lot of things on my own. I live alone, I cook, I shop, I do my checkbook,” says Gunther, who urges other employers to give people with disabilities a chance. “I have to work and pay bills, just like everybody. I don’t want to be hidden anywhere; I want to be out in the open mingling with people. I can do a lot for somebody who has a disability.”