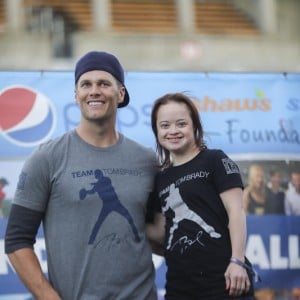 Several Patriots, both past and present, were on hand for the Best Buddies Football Challenge at Harvard Stadium Friday night, along with other various celebrities, to help raise money for the charity that aids the developmentally disabled.

Although not an official player for the game, former Pats tight end Jermaine Wiggins, wearing a suit and tie, came in from the sidelines and caught a touchdown pass from Brady.

Brady played universal quarterback for both teams, and threw a pick-six to Amendola on a pass intended for Edelman.

Brady finished with a touchdown heave to Dion Lewis, who tiptoed his feet in bounds as he caught the ball as time expired to give Team Pepsi the 80-74 win.

Governor Charlie Baker was also in attendance, and celebrity chef Guy Fieri, who has also been heavily involved with the charity since its inception, spoke at halftime.