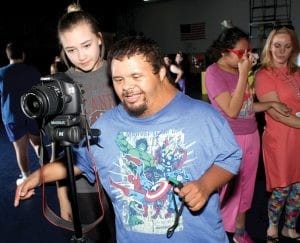 She wore a dark blue gown of her choosing for the annual prom at Wesley Chapel High School.

And, when she walked into the school’s gymnasium, Frost, 18, was no wallflower. She and dozens of her classmates, who attend exceptional student education (ESE) classes, had a grand, joyful prom.

The fourth annual prom for “students with exceptionalities” actually was Frost’s second prom.

And, the second time around, she knew what to expect.

“Have more fun, play around and talk with my friends,” the Wesley Chapel junior said.

They posed at the photo booth manned by Best Buddies students, Hannah Collin and Ethan Gelinas. The two journalism students took a break from their usual duties of taking annual yearbook photos to volunteer for prom duty.

A musical selection from Peggy Roski – “DJ extraordinaire” – filled the high school’s gymnasium with the beats and rhythms that had everyone moving. There was the Chicken Dance, Silento’s “Watch Me (Whip/Nae Nae),” the glide, and fan favorite selections from the Village People and Taylor Swift.

“My grandmother helped me pick it out,” she said. 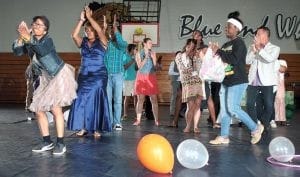 The prom began after parents lobbied to give their children the kind of memories that most students take for granted. Staff members at Wesley Chapel donated gowns and prom wear for boys. The fancy duds now can be found in the school’s ABC Closet.

And, Best Buddies also is aiding with fundraising efforts for the prom.

“It’s been getting better and better every year,” said Anna Simpson, a paraprofessional transitional assistant for the ESE program.

Many students meet initially in kindergarten, and move onto middle and high school together, Simpson said. “A lot of the kids are like family,” she said. “The families of the students get together at special events. They’ve been doing this since kindergarten.