Give Me A ‘B’: North Rockland’s Best Buddies Has Lots To Cheer About

Give Me A ‘B’: North Rockland’s Best Buddies Has Lots To Cheer About 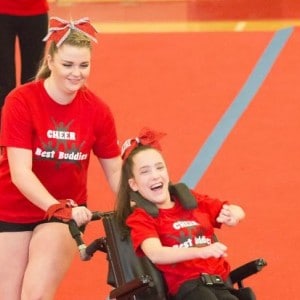 The squad performed stunts, jumps, motions and dances to customized background music that included the chant: “United and strong! Don’t limit us, ‘cause we belong!”

Those words had deep significance for both the mainstream and special education students on the newly formed team, said Teacher and Co-Adviser Gina Tedesco.

For the teens with intellectual and developmental challenges, it underscored their daily battles for inclusion and acceptance.

For members of the Varsity cheerleading squad, it was their way of saying they were prepared to go above and beyond in honor of their popular and beloved late coach, Lauren Bunyan Gould.

Gould, a graduate of North Rockland High School in Thiells, passed away last December at the age of 32 from complications of cystic fibrosis. The genetic disorder mostly affects the lungs, but can also involve other organs such as the liver and kidneys.

Gould founded Cheermania, a private competitive program for boys and girls. Tedesco, her former cheer coach and friend, said they had been wanting to include Best Buddies United kids in the program “forever,” but decided to try it out in the school first.

According to regional adviser Megan Kelly, the national nonprofit advocates for social inclusion of folks with disabilities.

The North Rockland chapter is, she said, one of the largest in the area; in just three years, it has grown to include more than 100 students, of all abilities.

The Best Buddies in North Rockland is a “promoters program,” committed to sharing the organizations mission and to providing opportunities for inclusion and leadership to people with disabilities. Amanda Casey, an occupational therapist, is co-adviser of the program.

Although the school does not make one-to-one matches, it works to raise awareness for the disability rights movement.

One such effort by the North Rockland chapter was the making of a “Stomp out the R-word” video, for Best Buddies’ annual “Spread the Word to End the Word” initiative, Kelly said.

Best Buddies kids participate in events and gatherings all throughout the school year, but the cheerleading thing is brand new, Tedesco said.

Becoming part of the Best Buddies program not only helped lift the spirits of team members who were sorely missing Bunyan Gould, it is allowing them to “make history at North Rockland High School,” Tedesco said.

Now cheerleaders of all abilities will proudly carry on in Bunyan Gould’s honor, said Tedesco, adding: “This is part of a new tradition.”