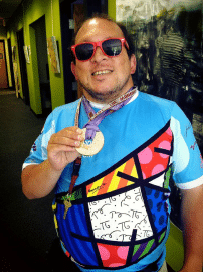 NEWTON, MA – Richard Berman, an ambassador for Best Buddies Massachusetts, will be honored at TD Garden Wednesday as the Boston Celtics take on the Washington Wizards.

Berman is receiving recognition as part of the Boston Celtics’ “Heroes Among Us” program, established in 1997 to honor “outstanding individuals who have made exceptional and lasting contributions to their communities.” The award is presented at every Celtics home game and pays tribute to the heroic achievements of everyday citizens.

As an Ambassador of Best Buddies Massachusetts, Newton native Richard Berman powerfully demonstrates what people with intellectual and developmental disabilities are capable of.

After first experiencing the program as a participant in 2000, Richard was inspired to begin volunteering at Best Buddies events. Named a board member in 2007, Richard has been instrumental in growing the organization to serve more than 6,500 people with disabilities in Massachusetts.

Incredibly, Richard has participated in the annual Best Buddies Challenge each year since 2009 directly raising more than $25,000 towards Best Buddies’ mission of social inclusion.