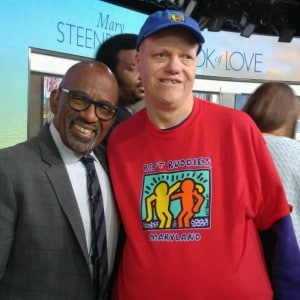 Michael Taylor’s journey is an inspiration to all who know him. He went from being isolated and deprived of his freedom after spending 30 years wrongfully institutionalized at the age of 13, to living on his own, and being the longest tenured employee at Best Buddies Maryland. Michael is an ambassador for Best Buddies, and a former member of the Board of Disability  in Baltimore County, Maryland. He and his best buddy Wayne Larrivey have been matched for 13 years.

This past summer, Michael was diagnosed with a life threatening ailment and needed immediate surgery. Two surgeons would not operate on him, but Michael advocated for himself and finally a doctor at the University of Maryland Medical Center agreed after hearing his story. He endured seven surgeries and spent 114 days in the hospital. The entire time, he was determined to come back to his job at Best Buddies Maryland that he has held for 14 years.

Immediately after his surgery, his buddy Wayne spent three days by his bedside making sure that when Michael awoke he saw a friend. One of Michael’s dreams was to meet Al Roker because during his illness he lost 80 pounds. 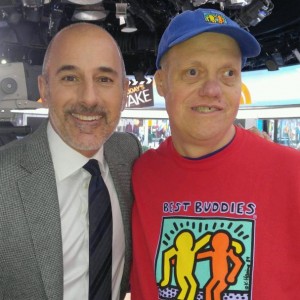 On January 11, 2017,  Michael’s dream came true when he met Al. He was so touched that he cried when he was first introduced to him. What a great way to begin 2017!