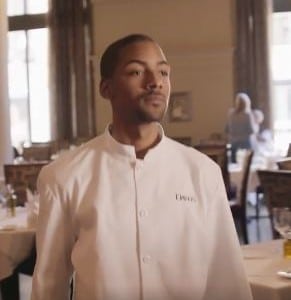 “I love working Monday nights, because the restaurant looks more elegant, and so peaceful, and romantic,” Chapman said.

He’s been working here for more than a year, and he’s done so well, he earned Massachusetts Best Buddies Employee of the Year!

“It’s such an honor to have that, such an amazing award to have employee of the year,” said Chapman.

“We thought we’d take these people in, and get some self-esteem, and teach em how to fish, right? We thought it was great for them, but you know what?  Honestly what happened was, it’s really helped us. We’ve all changed,” said Steve Difillipo, the chef/owner, Davio’s.

“I’m just working real hard, you know, always with a smile on my face,” said Chapman.

Another bonus for Chapman- playing football with Tom Brady.  Last year he caught a pass from tb12 at the annual Best Buddies Football Challenge at Harvard Stadium.

“It’s such a great honor to catch a football from the baddest football player in the planet.  You know?” said Chapman.

And the annual Best Buddies Challenge, is June 3.  Once again, 7News will sponsor the ride—all to benefit the non-profit organization.