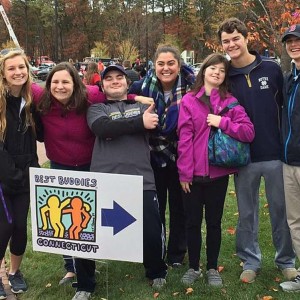 FAIRFIELD — A smile across her face, Caroline Maffai, 19, recounted fun going to the movies and out to restaurants with peers on weekend and after school outings she has enjoyed as part of her school’s new Best Buddies chapter.

Maffai, a Fairfield Ludlowe High School senior, is among members of the new club, a chapter of the international Best Buddies organization that aims to foster one-to-one friendships between people with intellectual and developmental disabilities — like Maffai — and typical peers. Ludlowe’s club launched this past fall, and Fairfield Warde High School is currently organizing a new chapter, set to begin meeting next month.

Libby Kennedy, a speech-language pathologist, joined Ludlowe’s special education department last school year. She was amazed by how integrated all students are into the school’s classrooms day to day, but as summer approached she thought about how students with disabilities are often the “forgotten ones” during breaks, after school and over weekends.

She learned of Best Buddies, a club she realized might help integrate students with disabilities outside the classroom.

“Students with disabilities — there’s kind of this unknown and fear of the unknown and there’s not necessarily discrimination — I think that students and faculty within the Ludlowe community, everyone is very accepting,” Kennedy said, “but I think (Best Buddies) takes away the unknown and really shows that people are people, and it doesn’t matter what your differences are, everyone has strengths and weaknesses. It just brings them together regardless.”

Kennedy worked with Fairfield parents, filled out an application last August and started to recruit students in September. Due to student and parent enthusiasm, she believes, Best Buddies approved the the chapter hastier than usual — by early November. More than 30 students with disabilities and typical peers are now in Ludlowe’s Best Buddies, which began to meet regularly in December.

Students text and Snapchat, or go out to get their nails done or ice cream. Kennedy has led group bowling and movies trips, and she plans to organize community service outings in the future. Last Saturday a group saw “Beauty and the Beast” for one member’s birthday. Currently, students personally pay at outings, but Kennedy is hoping to organize a fundraiser at a local restaurant soon to ensure no students miss out for financial reasons.

Sarah Sykes, a special education teacher at Warde, has worked to found the school’s chapter with family and consumer sciences teacher Amy Bien. They have held parent and student information sessions the past two weeks in preparation for a group to begin meeting at the end of April.

“I feel like it’s important for all students to have friends, and a lot of the students in my classes in particular are friends with each other but don’t have neuro-typical friends,” Sykes said, citing Best Buddies as an avenue to form those friendships.