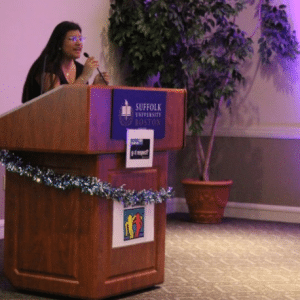 “To tell you the truth,” said Andre Williams, Buddy Director to the Suffolk University chapter, “The r-word is so demeaning and it’s so disrespectful. It makes me, as a person with a disability, feel like I don’t belong in this world.”

Minni Morales, president of the Suffolk University chapter of Best Buddies, has been a part of the organization for her four years here at Suffolk and said during the event that the people she meets in this program never fail to touch her heart. Since she was a child, Morales said she was an advocate against the r-word because her uncle, who has down syndrome, would be insulted with this word.

There were pamphlets that guests could take with recommended responses to anyone that had used the r-word in order to promote the elimination of its usage. Morales said she regularly tries to have a conversation with a person who has used the r-word, to educate them of the damage that this word can do.

Jenny LeBlanc, who has advocated for disabled people and is assigned by Best Buddies International as a Buddy Ambassador to the Suffolk University chapter, also spoke at the event and recounted how the organization has changed her life.