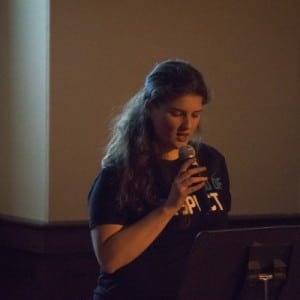 “There’s an old saying: Sticks and stones may break my bones, but names will never hurt me. … But boy, is that a lie.”

Alumna Kelly Reymann (’03), assistant director for The Center on Sensory and Complex Disabilities and an adjunct professor of education, is one of many who disdain the r-word: retarded.

Hosted by Best Buddies, the R-Word Monologues on Thursday, March 2, provided a space for students and faculty to share how the word has personally affected them or the people they love.

The sense of community could be felt around the Library Auditorium as people filled up the chairs and leaned against the walls while chatting with one another.
The audience’s attention was brought to the front of the room as a screen displayed the words “unity,” “inclusion,” “friendship” and “respect.”

The night began with a video — one that elicited smiles and small fits of loving laughter from the crowd. The video also explained the night’s mission: to spread awareness for the r-word’s impact.

Shanaya Panday, co-buddy director of Best Buddies and a junior career and community studies major, understands just how much the r-word can hurt.

“There were definitely times where I was called ‘retarded,’ but there is one story I remember that still haunts me every day,” Panday said.
When she arrived to her classroom during a typical day in high school, Panday found a note on the door directing students to go to another room. Panday thought it was a better idea to stay put because no one knew which class the note was referring to.

When asked by a group of boys why she was waiting in the classroom, Panday, with strength and poise, explained her logic.
Then, one of them turned to her and said, “Well, you’re retarded.”

With as much thought as it takes to blink or breathe, a label was bestowed upon her. It didn’t matter if Panday was right or wrong, what mattered was that the student never stopped to consider how using the r-word might make her feel.

Reymann believes changing this negative mindset toward people who are different begins with teachers.

“Teachers are role models,” Reymann said. “And they have several little fans, like my 6-year-old son, who every year looks up to his teacher and hangs on to their every word. And guess what? All of those little fans are the future employees, colleagues and friends that will live in the same community, go to the same churches and stores as their peers with disabilities.”

Reymann recently shared a moment with her son that she will never forget.

On a sunny autumn day, Reymann and her son took a walk. During the walk, her son told her that his class was asked to sing the alphabet to another class of differently abled individuals. He described the happiness on the kids’ faces as his class sang to them.

At the end of the song, his best friend turned to him and said, “Those kids were so weird.”

To Reymann’s surprise, her son’s response encompassed everything she hoped he had learned throughout the years.

“They’re not weird, they just sound different. Different is cool,” he told his friend.