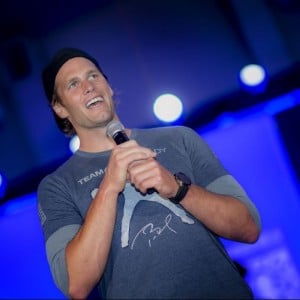 The weekend’s festivities kicked off with the Tom Brady Football Challenge and Guy Cooking with Best Buddies Celebrity Chef Food and Wine Festival at Harvard on Friday, June 3. Nearly 4,000 spectators filled the stands for the event to watch Team Pepsi-Cola take on Team Santander, all for a great cause. The game was a close one, but Team Santander came out victorious with a final score of 52-50.

On Saturday, June 4, Best Buddies Challenge: Hyannis Port participants turned out in droves for a 100, 50, or 20 mile bike ride and laced up their running shoes for a 5K run/walk. Several of them teamed up with Best Buddies participants and competed on tandem bicycles in the “Friendship Races”, including Anthony K. Shriver, Tom Brady and his best buddy, Katie Meade.

The Challenge was capped off by a celebratory clambake and private concert by the legendary Beach Boys, who rocked the crowd with several of their greatest hits. During the festivities, Anthony K. Shriver, Founder and Chairman, Best Buddies International, encouraged guests to “Sponsor a Buddy” (to attend the Best Buddies International Leadership Conference this July) through the Tom Brady Football Toss. Brady tossed signed footballs to guests who paid $1,500 or more for each one, giving numerous buddies a chance to attend the Conference. In total, the football tosses raised more than $100,000 at both Friday’s tailgate celebration and Saturday’s clambake in Hyannis Port. During the event, Pepsi-Cola was honored with the organization’s Spirit of Friendship Award.

“This weekend’s Best Buddies Challenge festivities were the embodiment of the organization’s mission and it was a pleasure to once again support such a meaningful event, especially given how perfectly it aligns with Santander’s commitment to make a difference in the local communities we serve,” said Michael Cleary, Head of Consumer and Business Banking for Santander. “Team Santander was thrilled to work with Tom Brady and other athletes, celebrities and Buddies to put points on the board at Friday night’s Football Challenge, and to join the 2,500 cyclists victoriously riding into Hyannis Port in support of the cause on Saturday.”