It took Kevin a while to find a job that was the right fit. As he tells it, he spent years “working with other job agencies in efforts to find a good job, which came with a lot of frustration and [few] results.” Kevin experienced firsthand what we already know: that many of the jobs in today’s workforce are either inaccessible to, or limiting for, individuals with disabilities. He needed a workplace that would not only set clear expectations for him, but also help him find opportunities for growth. Kevin found that in the Federal Aviation Administration (FAA). 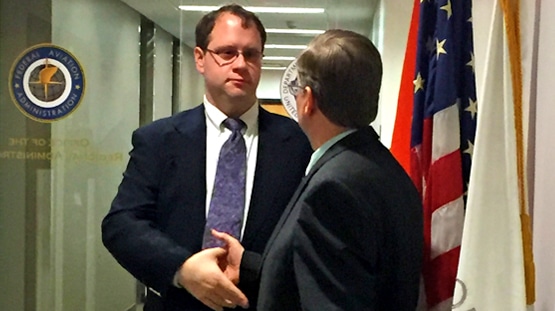 Hired in December of 2016, Kevin works as the office automation clerk at the FAA’s New England Region office. He is in charge of scanning and archiving files for the department, and he has added real value to the office.

Here’s what the Deputy Director had to say about Kevin:

“Kevin is particularly skilled in computer work. He was hired and initially asked to scan and file thousands and thousands of Federal Aviation Administration Orders and Guidance to help create an electronic file. Kevin turned out to be a very fast worker. He enjoys working and enjoys the people he works with as well. He has done work for many of our staff and recently scanned and created hundreds of land acquisition files we had no room to store in the office.”

The hire was as beneficial for Kevin as it was for the FAA. He works full time, makes well above minimum wage, receives benefits and has a great natural support system.

“Financially, I’m in a better place. I know that I can do the things that I love and help my family”

On top of the financial benefits, Kevin also feels that, finally, his work is valuable.

“My work is important and helps the government and helps the region. What I do really matters. I never felt that most of my other jobs ever accomplished anything. I want my job to have meaning. [Now] I can look at myself in the mirror and say yes you have a good job and you’re lucky to have it.”

Kevin hopes down the road to be able to continue his education, try to move up the ladder, increase his pay, and continually try to challenge himself. There is no doubt that he’ll be able to do just that.