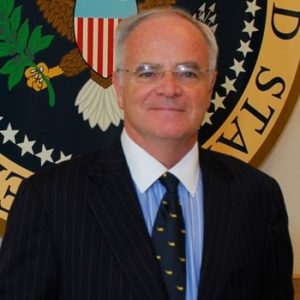 Through his work as an intern in the Peace Corps in 1962, John was introduced to the Kennedy/Shriver families. He subsequently worked for President John F. Kennedy in The White House as his messenger, worked in the office of Mrs. John F. Kennedy supervising the answering of her condolence mail and in the offices and campaigns of Senators Robert and Ted Kennedy. In 1968he worked at the Democratic National Convention for George McGovern.

In the early 1990s he served on the Best Buddies International Board of Directors and as Vice President of Development. After working as Director of Development at the Smithsonian Institution’s National Air and Space Museum and Senior Development Officer at the National Museum of the American Indian, he returned to Best Buddies to expand its fundraising efforts.

Currently, John is responsible for working with David Quilleon and Anthony K. Shriver on major gifts through Team Rosemary, with Mark Lewis and the ride team on sponsorships for the Best Buddies Challenge – Hyannis Port, and with Alex Hernandez-Dessauer on international development. He is liaison to Best Buddies International’s Board of Directors and oversees the Best Buddies Alumni Association. John attended the Edmund A. Walsh School of Foreign Service at Georgetown University where he majored in International Affairs.