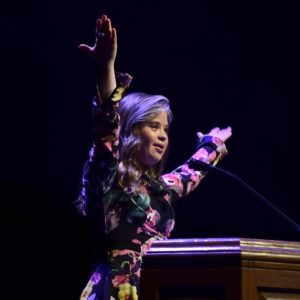 Megan Bomgaars, a self-advocate, artist and entrepreneur with Down syndrome, performs a speech called “Don’t Limit Me”. “Don’t limit me by thinking that I can’t learn in your classroom,” Bomgaars said.

The energy level was high in the IU Auditorium on Friday as attendees to the 28th annual Best Buddies Leadership Conference screamed chants and waved glow sticks, and ushers and volunteers gave high fives to participants as they entered.

Thousands gathered at IU for the conference this year, the theme of which was “Pass the Torch,” emphasizing the importance of preparing and empowering future leaders.

Best Buddies International, a non-profit with more than 2,300 chapters in nearly 50 countries, is dedicated to creating opportunities for one-to-one friendships, integrated employment and leadership development for people with intellectual and developmental disabilities.

“Best Buddies is so great because it provides opportunities to so many different kids, adults and teens that might not have had the chance to make friendships with so many different people,” said Katie Nettee, a peer-buddy from Maryland.

The organization was founded by Anthony K. Shriver in 1984 and provides eight flagship programs that affect more than 1.1 million individuals with and without disabilities worldwide,  according to its website.

Best Buddies Jobs is one of those eight programs. It is a supported employment program that secures paying jobs for people with intellectual and developmental disabilities, enabling them to work as respected individuals.

Wayne Reed, a Best Buddies ambassador and member of the jobs program, has spoken at previous leadership  conventions.

“This summer is the upcoming anniversary of five years since I’ve done my first award-winning speech in front of everybody in the auditorium,” he said. “I couldn’t have done it without the help of the state of Maryland, my fellow staff and my teachers supporting me.”

At an opening ceremony, a DJ from Florida played loud, energized music as attendees already inside danced and sang along to songs like “All I Do is Win” by DJ Khaled and “Cupid Shuffle”.

Purple spotlights flashed on the stage, and moving colors on the wall created a soft atmosphere, though the energy was anything but.

“Everybody’s hands go up,” T-Pain sang on the track as members of the audience collectively raised their hands.

Once 8 p.m. hit, the lights dimmed and intense music started to play. Four Buddies walked out carrying torches as peer-buddies accompanied them with flags. After the music stopped and they paused on stage, sparks flew and Shriver walked out to say a few words.

“The days of feeling sorry for our special friends, the days of charity work, the days of ‘oh how can I help them get ahead, how can I hold their hand, how can I set the table for them,’ those days are over,” Shriver said in his speech as the audience cheered.

Shriver touched on this year’s theme, saying that passing the torch is important because it is inclusive.

“Everything that we’re doing in our organization is led by, driven by, inspired by, motivated by and energized by the brain power, the will, the drive and the determination of our special friends,” Shriver said before introducing Megan Bomgaars.

Bomgaars is featured on the A&E TV show “Born This Way”, and was the first cheerleader in Colorado to compete with Down syndrome. Bomgaars was visibly nervous, taking deep breaths before beginning her speech. The crowd jumped in to reassure her.

“You got it Meg!” someone yelled from the back of the audience as members cheered for her.

After a few deep breaths and the encouragement of her peers, Bomgaars began her speech.

“It is a big honor to be here speaking with Best Buddies today,” Bomgaars said. “I want to share with you my dreams and goals.”

Bomgaars, 23, and a student at the University of Colorado – Colorado Springs, talked about her experiences paying her own taxes and writing an upcoming book called “Don’t Mimic Me.”

Mikayla Holmgren and Marlana Vanhoose were among the other speakers and performers at the  conference.

Holmgren competed in the 2017 Miss USA pageant as Miss Minnesota, and took the stage wearing a white dress and a flower crown. She performed a dance to the song “Beautiful Me” by Nichole Nordeman. She incorporated gymnastics into her dancing, and received a standing ovation from the crowd as she bowed.

Marlana Vanhoose, born with Cytomegalovirus, performed a musical number. Doctors discovered that she was blind when she was only a few weeks old. She was also diagnosed with mild cerebral palsy, according to her  website.

Her voice pierced a silent crowd as she played the piano and sang “Rise Up” by Andra Day. The audience swayed together, using cellphone lights and glow sticks to light up the crowd.

Her second song, “Celebration” by Kool & The Gang, had the audience clapping while standing on their feet.

“Bring your best friends and your leaders too, we’re gonna celebrate Best Buddies with you,” Vanhoose sang to the tune.

Vanhoose wasn’t the only musical act to perform. Sam Piazza, a Best Buddies Ambassador, introduced reVoiced, an a capella group. The group is an avid supporter of Best Buddies and had Piazza star in one of their music videos, which they showed to the audience.

The group emerged on a rising stage as their music video ended and performed “Get Ready” by The Temptations, as well as “Happy” by Pharrell Williams and “I Won’t Give Up” by Jason Mraz.

During the opening ceremony, awards were presented for things like Outstanding High School Chapter, Outstanding College Chapter and Best Buddies Job Employee of the Year. A torch sat front and center on the stage as a reminder of the conference’s theme as the speeches and awards were given.

“Even though I have disabilities, I have abilities,” Best Buddies Ambassador Katie Meade said in her speech.

Best Buddies is an inclusive group, and is still working to expand and reach more people. By the end of 2020, Best Buddies hopes to have offices in all 50 states and expand to 100 countries, the organization said in a press release.

“I’ve been in a lot of clubs. I’ve done a lot of things. I’ve been a lot of places,” said Evan Carnes, an incoming freshman majoring in Law and Public policy. “But few things feel quite as invigorating as just being here, just shouting until you lose your voice, like I will here soon, and just seeing everyone smiling coming from all corners of the world for the same cause.”