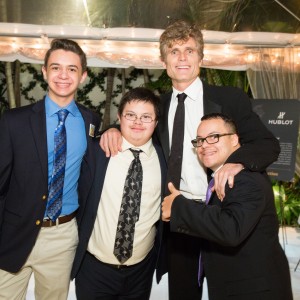 Haute 100-lister Anthony Shriver and his ever-giving family are known in Miami and abroad for their admirable philanthropic endeavors. From the creation of the Special Olympics, the Peace Corps and to Best Buddies, the Shriver’s can be credited to spreading good throughout the globe for a range of philanthropic causes. Now, Anthony’s sister Maria has started her own movement, Move for Minds, benefitting The Women’s Alzheimer’s Movement, and is hosting an event this Sunday on June 4th at Equinox Sports Clubs in eight different cities—including Miami—from 10 a.m. to 1 p.m. The event will fundraise by offering a one-hour workout specifically designed by Equinox’s top fitness experts to optimize both body and brain health, incorporating yoga, mindful meditation and cross training. 100 percent of the proceeds will benefit The Women Alzheimer’s Movement. For more information on the new cause and its background, as well as some other endeavors of the Shriver family, Anthony Shriver sits down with Haute Living for a Q&A on philanthropy.

How did you and your family become so involved in the philanthropic community? Please expand specifically on Move for Minds / The Women’s Alzheimer’s Movement and Best Buddies International.

I had the good fortune of being involved in philanthropy my entire life. I grew up with my parents, whom I think of as great philanthropic leaders. My mother Eunice Shriver started Special Olympics, and my father Sargent Shriver started the Peace Corps and so many of the poverty programs under President Lyndon B. Johnson. So I grew up with the concept that you enrich your life by giving back. You become smarter, kinder and gentler the more you give of your time and your energy. I think the Move for Minds event came out of my sister’s desire to create an event that would capture people’s spirit, and increase people’s understanding of Alzheimer’s; to also teach people about how they can participate; make them aware of the deadly disease called Alzheimer’s; to help them adjust their lifestyle through health and fitness to reduce the risk of Alzheimer’s. This initiative has really been the brainchild of my sister and she’s done a fantastic job with it. I’m thrilled that Best Buddies, and so many of our supporters, and myself can get out there and support the Move for Minds initiative.

I created Best Buddies International in 1989 with great inspiration from my mother Eunice Shriver and my Aunt Rosemary Kennedy. I recognized that people with intellectual and developmental disabilities (IDD) lacked opportunities to socialize with their peers without disabilities and that friendship really is key to building the self-esteem essential to a happy and productive life. Best Buddies helps people with IDD form meaningful friendships with their peers, secure successful jobs, become self-advocates, and feel valued by society. Our programs are in all 50 states, 54 countries around the world, and impacts the lives of more than 1.1. Million people with and without IDD.

I think it’s great that the Mayor of Miami stepped up and declared June 4th as Women’s Alzheimer’s Movement Move for Minds Day. The more awareness that we can bring to this cause, the better. It is my hope that this greater focus on Alzheimer’s will lead to our state and federal government allocating more funding for research to find a cure one day.

How will the upcoming Move for Minds event, hosted by your sister Maria, raise awareness for the cause?

More awareness leads to a greater focus on such an important issue like Alzheimer’s. Events like Move for Minds will certainly increase awareness about Alzheimer’s and equip people with knowledge that they can use to help delay the onset of the disease and lower their probability of Alzheimer’s disease. It’s a great first step, but there is still lots of work to be done.