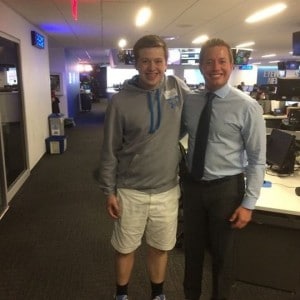 Best Buddies, an international nonprofit dedicated to establishing a global volunteer movement for people with intellectual and developmental disabilities (IDD) through one-to-one friendships, integrated employment, and leadership development, has helped many participants realize their dreams and achieve their goals.

One ambitious Best Buddies participant is Zach Smith, who has always dreamt of working in a NYC television studio. He is currently a communications major at Worcester State University in preparation for a career in the broadcast media industry.

As a surprise, his parents took him to New York City—the city he hopes to work in after college. With the help of Best Buddies staff, who coordinated a studio tour, he was able to visit the WABC television station.

Smith excitedly explored the studio. He spent time in the control room, met notable news anchors Bill Ritter and Sade Baderinwa, along with his favorite sports anchor Ryan Field. The sports anchor even gave Zach professional advice and career tips for landing a job in the television industry.

He was touched by everyone’s friendliness and kindness, even more so when Investigative Reporter Jim Hoffer gave Zach his Edward R. Murrow award plaque. 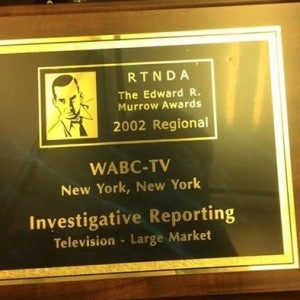 The Edward R. Murrow award that was given to Zach

“Zach was on cloud nine the entire time, and enjoyed every minute of the experience,” said Zach’s father, Bob Smith. “Thank you all so much for fulfilling the wish of our son. I can’t tell you enough how much this experience meant to him. Zach has been so incredibly blessed by his experiences with Best Buddies. We cannot thank you all enough.

After his trip to New York, Zach feels more inspired and motivated to pursue his goals, and is grateful to Best Buddies for making his dream come true.