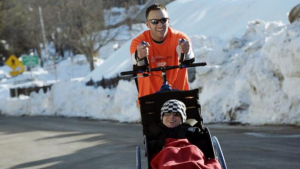 Alosha O’Brien was born perfectly healthy, but after living through the 1986 Chernobyl nuclear disaster when he was nearly 2, his body didn’t grow properly, and he developed disabilities.

Now 30 and living in the United States since leaving Russia, O’Brien mostly gets around with the help of crutches or a wheel chair.

He never could have guessed that he would be preparing for his second Boston Marathon, where he’ll be pushed in a specially designed wheelchair by Craig Welton, the Massachusetts director of Best Buddies International, a nonprofit working to give opportunities to people with disabilities.

“Your dreams can be true,” O’Brien told ABC News. “You have to believe instead of always thinking negatively. There are people around the world, so many, that are nice.”