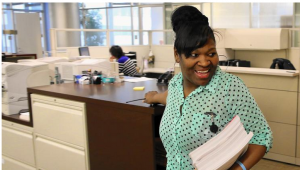 Seyfarth Shaw, one of the city’s largest law firms, occupies nine floors of a skyscraper at 131 S. Dearborn St. Shalonda Sanders is responsible for picking up and delivering packages on each of them, plus keeping certain areas clean. It is a job she cherishes.

I love my co-workers, all of them,” Sanders, 35, said of the 15-member office services team of which she is a part. “Downstairs,” she said, referring to the mail center, “I consider us as one.”

Sanders, who suffered brain damage when she was struck by a car as a child, was hired at Seyfarth about a year ago with the help of Best Buddies Illinois, after many years of trying unsuccessfully to gain paid employment.

The local chapter of the national nonprofit, best known for fostering one-on-one friendships between people with disabilities and a network of volunteers, had recently launched a jobs program to place people with intellectual and developmental disabilities into competitive jobs.

The program, one of many attempting to tackle the massive unemployment rate among the intellectually disabled, is part of a movement away from what are known as sheltered programs that keep disabled workers apart from the mainstream workforce and often pay less than minimum wage. Its challenge is to show companies that tapping into this underused talent pool isn’t just a good thing to do, but good for the bottom line.

The Illinois chapter, one of 12 markets where Best Buddies has a jobs program, so far has placed 14 people into customer-facing jobs at companies including Silicon Valley Bank, The Protein Bar and law firm Holland and Knight. Efforts to recruit more are underway. Late last year, City Club president Jay Doherty, who has an 8-year-old daughter with Down syndrome, hosted a breakfast to find more employers for Best Buddies clients. So far, one company that attended, Norwegian American Hospital, has hired a buddy as a dietary aide in its cafeteria.

Though some corporations, such as Walgreens and Fifth Third Bank, have well-regarded programs for employing people with disabilities, the unemployment rate among the intellectually disabled remains about twice as high as that of the general population and higher than that of people with physical disabilities. Despite federal investments in transition programs, the situation has not improved.

A third of working-age people with intellectual disabilities are employed, compared with three-quarters of adults without disabilities, according to a study released last year by the Center for Social Development and Education at the University of Massachusetts at Boston, conducted by Gallup on behalf of Special Olympics. Just 44 percent are participating in the labor force, which includes those looking for a job, compared with 83 percent of the nondisabled, according to the study, which polled the guardians of some 1,000 intellectually disabled people ages 21 to 64.

Those who are working tend to be part-time employees or underemployed.

Less than one-fifth of the intellectually disabled were in competitive jobs, the survey found, meaning they are integrated with nondisabled peers and generally paid market-level wages — the favored outcome of many advocates. Thirteen percent are in sheltered programs. Another 3 percent are self-employed.

The reasons behind the lack of progress are complex, said Gary Siperstein, director of the center that published the study. Among them: insufficient preparation of young people for the working world, the loss of unskilled and semi-skilled jobs in the U.S. and setbacks from the recession. His research has shown that early job training is key, as most intellectually disabled people who are competitively employed had their first job before turning 21.

In addition, he said, “I’m not sure we convey to businesses, particularly to small businesses in communities around the country, that it makes good business sense.”

Sanders, who volunteered periodically at day care centers before Best Buddies found her the job at Seyfarth, said she got the sense her former supervisors didn’t trust her to perform certain tasks. It was distressing.

“She felt useless, like they didn’t really want her there,” recalled her mother, Lucinda Jones. “There was no sense of worth.”

Sanders had overcome long odds to get to where she was.

She lay in a coma for eight months after being struck by a car as she walked home from school on the South Side when she was 9, Jones said.

With damage to the right side of her brain, Sanders had to relearn to walk and feed herself, and for years endured full-body tremors and brain seizures. After graduating from high school, she insisted on pursuing an associate’s degree in teaching at Kennedy-King Community College, and after six years, though she didn’t complete her degree, she walked at graduation.

“She shook all the way across the stage,” Jones said.

But getting a job proved harder still, and Sanders spent several years bored at home, sleeping or watching TV, her mom said — until Best Buddies opened a door to a new life.

With the help of a Best Buddies job coach, who helped Sanders dress for her interview and shadowed her daily for her first two weeks on the job to ensure she was settled, Sanders overcame the initial jitters and now considers the firm her family, Jones said.

“Shalonda feels like she’s grown now. She’s learning how to appreciate going to get her hair done and nails done, she feels good that she can go and buy gifts for people’s birthdays,” Jones said. “She was like a seed that was waiting to be watered.”

Sanders isn’t the only one who has benefited from her hiring.

At Seyfarth’s Chicago office, which hadn’t employed a person with intellectual disabilities before, Sanders has been good for office culture, said office administrator Michael Arizzi.

“Her love of her job and her enjoyment in being here — I think for many of us who at times are worried about their particular problem on a given day, she’s a big pick-me-up,” he said.

The Chicago office got involved after Seyfarth’s Boston office, a major fundraiser for Best Buddies, hired two employees through the program.

Like her peers at work, Sanders is on a growth plan to cross train on different skills, including how to route packages, make copies and do binding and laminating.”

It’s no different than any other employee here,” said Sanders’ supervisor, Gaavin Davis, a 29-year veteran. “She has her limitations, but so do I.”

Some corporations have been leaders in courting people with disabilities for competitive positions.

At Deerfield-based Walgreens, more than 12 percent of its distribution center employees have a self-disclosed disability, said Steve Pemberton, Walgreens’ chief diversity officer. That exceeds the federal government’s rule for federal contractors, which stipulates that disabled employees represent 7 percent of the workforce.

It is not charity, Pemberton said, but a business-driven decision. Many are on the autism spectrum and learn in a mechanized, rote way, which is useful in a distribution environment that is highly mechanized and time-sensitive, he said. Given the efficiency demands of supply chain, there is no room for lower standards.

In addition, “When you have a disability, there’s a certain resilience you have to have to navigate the world, you look at challenges from a different perspective,” he said. “Who wouldn’t want to have a problem-solving skill set on their team?”

Training, and finding the right fit, are instrumental, Pemberton said, as anything but a successful job experience, especially when it is a person’s first opportunity for meaningful employment, can reinforce self-doubts.

While opportunities for people with disabilities have improved, more companies need to “expand the definition of who’s capable,” he said.